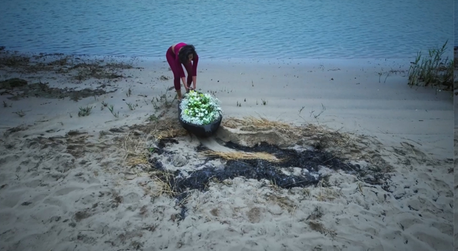 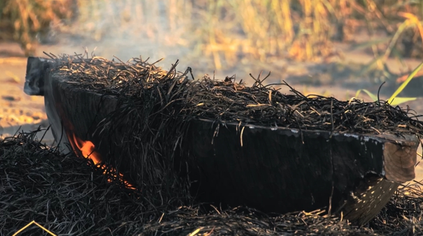 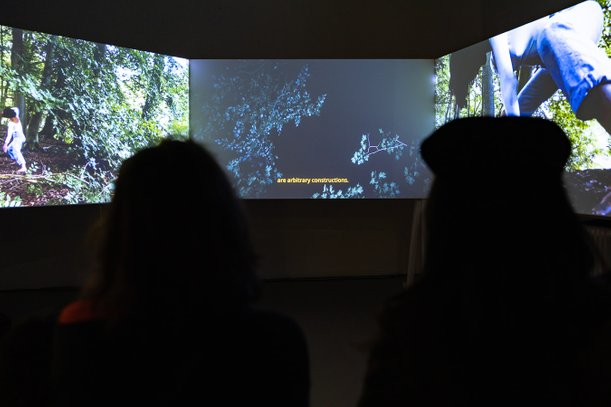 Performing Loss derives from the sudden death of my father. As an atheist and an immigrant living in the Netherlands, I realized that I didn’t have any rituals of mourning. Looking for new strategies, I took an ethnic DNA test.

The DNA of one individual can tell about the history of colonization, immigration, and cultural exchanges. My own result is a typical Brazilian mishmash: Ameredian, Portuguese, Sardinian, North African, Nigerian, Baltic and Finish. Aiming to form a narrative bigger than myself, I chose to visit the triangulation of my country’s colonial history: Portugal, Brazil and Nigeria.

The result is twofold: Part I - The Voluntary Psychopomp, a three-channel video that narrates the search for a ritual, and Part II - Through the Mouth, a performance in which the alteration of cassava root is reimagined as a grieving ritual.

The three-channel video portrays a contemporary psychopomp as a craftswoman who carves a monolithic canoe. It intertwines the making of the canoe with the process of the project itself: the DNA test, the trips, the search for a ritual. The project recontextualizes ancestral techniques, such as the process of carving solid wood with a chisel and firing the canoe in order to make the wood stronger, as ways to process grief. The film mixes scientific texts about the neuroscience of ritual and Brazilian genetics with the rawness that can only derive from first person accounts.